Lay Your Head Down

Trick of the Light

Over Bar the Shouting

In 1978 I arrived at the Wirral with a guitar, a bottle of whisky, two shirts and a typewriter strapped to the back of an old Puch motorbike.

So this is a potted history of the songs I wrote and recorded while I as there, fifteen of them from almost the first to almost the last.  The CD was produced as a gift to my friends and scattered around the clubs where I had enjoyed playing and given away more or less at random, with an invitation to copy and pass it on if so desired.

The original name of the CD was Love & Peace, and the bumpf said, in part, “As you can tell by the name of the CD, I am nothing but an old hippy. These songs cost me nothing but a little damage to the heart, and this is for those of you who have been my friends.  With thanks for everything.”

The quality varies - it was recorded, mostly amateurishly, on a variety of tape based machines and produced quickly on a home PC. 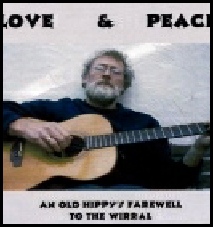