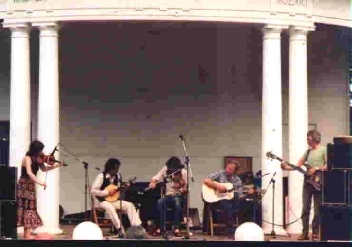 PS Not sure why we’ve scalped Kim in the band’s photo, but it’s the only photo I’ve got! Perhaps we didn’t like her hat…

he Fiddle Band started back in the dark ages when I was young and my beard was brown, round about 1980. I kicked it off at a Christmas Party at the Kingsway Folk Club of fond memory, in Wallasey on the Wirral and after one or two early changes of personnel, settled down to a lineup of the Caller, Quentin Leonard, Mary-Ann Wise on fiddle, Jon Oxley on mandolin and flute (and remarkably sixties white suit), Bob Davies on guitar, Bob Ballard on banjo, myself on piano and fiddle and Doug Mudd on bass. 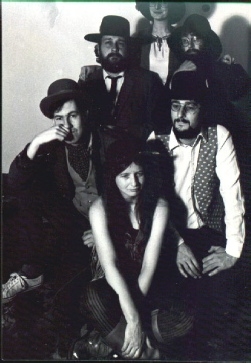 After a while, Douglas buggered off to be a megastar round the pubs and clubs of Merseyside playing guitar for his girlfriend, who was a fine singer, and he got replaced by Martin Tetlow, who now rampages around the place with the Jalapenos.  Phil Hare replaced Bob Davies on guitar after a small incident with a vacuum cleaner* and his wife, Kim, joined us on whistles and percussion. Sadly, as in the end everyone went off with everyone else's wife, girlfriend, or pet koala, that was the demise of that particular band. You can imagine the spitting, cursing and noises off.

Enough said. It was pretty good, though, while it lasted. There's some tunes below, the first being an O'Carolan tune called Hewlett's, with Mary-Ann on fiddle, Kim Tetlow on whistle and Phil Hare on guitar.

Then there are a couple of sets recorded during a concert at the Little Theatre in Birkenhead. We're all there, and Big Paul danced. There's a set of polkas (Wally & Daisy's, Knick Knack) and Colonel Robertson and the Atholl Highlanders, who always sound like a Sunday night cabaret act, but they were probably pretty fearsome in the pub, afterwards...

* this involved a heated row with Arthur, who, as everyone knows, is the most calm and even-tempered of men and unbelievably easy to get on with.  Hmmm.