I started running ceilidh and barn dance bands about forty years ago - the Fiddle Band was the first one, growing out of a Christmas party night at a folk club on the Wirral.  People seemed to enjoy dancing and the noises we made, so after about forty personnel changes it ended up playing for fifteen years before breaking up in circumstances that my notorious sense of tact forbids me to describe….

Be that as it may, I carried on calling dances and formed the 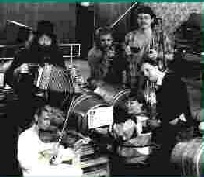 Titanic Disaster Band, so called partly because it went down well (and partly due to the way the previous band imploded!), and that carried on for many years until I moved away from the Wirral.

After a while of being a freelance caller for several Cheshire bands, I formed the Lifeboat Band - well, it had some refugees from the Titanic on it, so I thought it was apt… this was a three piece group, playing mostly for smaller venues who couldn’t afford five or six hundred quid for a full six piece band.

Gradually, as time went on, this was replaced by the Irish 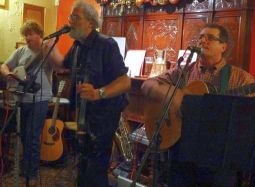 band Kiss the Blarney, also a three piece, and while the Lifeboat is occasionally floated for friends, most of the dances we did were played by the Blarney as part of our regular working week.  Now that the Blarney is no more, it’s back to the occasional foray with the Lifeboat Band, with my wife Karen playing bass or piano and a.n.other on guitar!

We don’t really look to do them any more though - I enjoy playing guitar and singing more than I do standing by a mic shouting at people, so it’s just the odd dance for friends if the mood so takes me…

But like everything else, it was pretty good while it lasted!