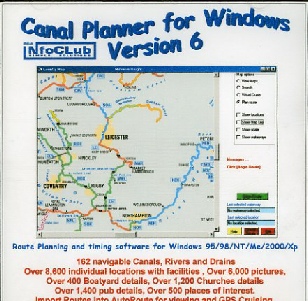 I’ve been asked about this a few times since I mentioned it first on the Canalworld forum.  The final version of it, Version 7, could only be authorised via a weblink which vanished when the developer emigrated to Australia.  There appears to be no way that the program can then be transferred from one computer to another as it requests a new authorisation.  I gave up after some research and chucked mine in the bin, which was a shame as it wasn’t exactly cheap, and I thought it deserved either a universal key being issued or some other way of making it available.  There again, I’m no programmer, so what do I know.

However, the previous version still works, though without some of the bells and whistles of the final one. I presume it will work on anyone;s computer and as it isn’t supported any more and the developer has shown so little interest, I’ve copied the two discs into Nero disc image files and here they are.

I presume you can right click on the links and download them and then Nero will burn them back onto a couple of CDs and they should run - they run on Windows 10 OK (and ran on XP and 7).

PS Your computer will tell you you are trying to replace newer files with old versions and you should keep the new ones - and so you should! One file doesn’t seem to load - just skip it as it isn’t required.